A day in the Bay spent the proper way, a Tailgate for Boise State at San Jose! pic.twitter.com/OrnLpytPFI
— Dan Donnelly (@Dantailgater) November 27, 2015

The DFT Bay Area contingent enjoyed a double header weekend with both Boise State and Notre Dame coming to town.  Bright and early on the morning after Thanksgiving, the First Family of Tailgate headed south to San Jose to watch our formerly mighty Broncos take on Sparty. We were accompanied by families from Danville who all sent their kids to the school with the Blue. Many of the families we had previously tailgated with when our #1 was matriculating through BSU. A fantastic breakfast tailgate was served consisting of a kettle pot egg scramble, egg puff pie, Mullica’s man candy (bacon wrapped lil smokies with brown sugar), pastries, breads, fruits, Irish coffee, Bloody Mary’s and of course the obligatory Fireball Aperitif. 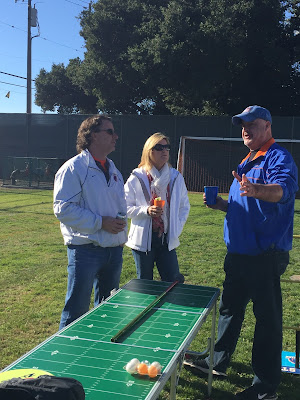 For the last time, that is not how you play Beer Pong! 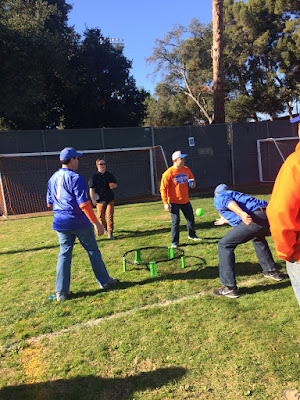 The Boise State Broncos were in the midst of a disappointing season having suffered four losses coming into the game Saturday sporting a 7-4 record. The Broncos would nonetheless be favored to win against a San Jose State that needed to win the game to become Bowl eligible. The first half tempo was dictated by San Jose State as they held a 10-9 advantage going into their decrepit locker room at the break.  Boise State was pushed and tested through the third quarter until they finally pulled away in the fourth securing a 40-23 win. Boise ends the regular season with an 8-4 record and awaits their Bowl destination. For San Jose State, their season is sadly over.


On Saturday we made our way over to the Farm in Palo Alto for the Notre Dame-Stanford “Battle Royale”. We co-hosted with the Iorios’ and were joined by a host of old friends, new friends, kids, Irish fans, folks from Ireland and DFT loyalists. Tri-Tip Sandwiches and Italian Sausages were the main course accompanied by a slew of tasty side dishes, a full Bloody Mary bar and many other necessary accouterments to make a successful Tailgate. The only time the Stanford football scene really comes to life is when the Irish invade the Farm. The Tailgate area was approximately ten times fuller than a normal Stanford game would have.


Notre Dame needed to win this game to have a legitimate shot at the four team college football playoff. As it stood, the Irish were in sixth place entering the contest. Stanford having secured the PAC 12 North, had an outside shot at the playoff if they were able to beat ND and win the conference Championship next Saturday. Each team moved the ball with ease through the air as the defensive secondary’s posed no threat at all. ND and Stanford traded scores throughout the contest with the Irish scoring the apparent game winning touchdown with thirty seconds left to go up by 1 point.  However, after Stanford got the ball back, QB Kevin Hogan was tackled by the facemask resulting in a 15 yard penalty followed by a 25 yard completion up the middle. Stanford ran one more play before bringing their kicker on to attempt a 47 yard field goal on a chilly night into the wind. As we know now, the kick went right down the middle giving the team with the disrespectful Nerd Band and crappy mascot a win over my Fighting Irish (Name to be changed soon for being derogatory and offensive toward my type). My Irish eyes were crying. Nonetheless, it was the most exciting game I attended all year.


Around the Nation – In the marquis game of the weekend, Our “House Divided” watched “Bedlam”, as the Oklahoma Sooners knocked off the Cowboys in Stillwater presumably securing a spot in the college football playoff. In the Big House in Michigan in the game simply known as “The Game”, The Ohio State University took it out on Team Harbaugh by leaving the maize and blue, more black and blue with a 29 point win. Iowa ends their regular season unbeaten by knocking off Nebraska. They will face off in the Big Ten Championship game next Saturday. On Friday night, in one of the sloppiest games of the year, TCU edged Baylor in overtime in Fort Worth. Navy lost their chance of playing in a Premier Bowl by going to Houston and announcing they had problems. Here are the other scores from major rivalry games around the country:

Here is the lineup for the conference Championships next week:

Bieber Award – Goes to LSU AD Joe Alleva and the rest of the Baton Rouge Administration for their handling of the Les Miles drama over the last few weeks. It had been widely speculated after LSU lost to Bama a month ago that Miles would not be back next season. Miles is the all-time winningest coach in LSU history. Rumors swirled about that the announcement would come after their last regular season game on Saturday against Texas A&M. What was happening behind the scenes was an attempt to lure Jimbo Fischer from Florida State to replace Miles. When that fell through this past week, combined with a tidal wave of public support for the Mad Hatter, Alleva was forced to retain Miles as head Coach. In doing so in the post-game presser, Alleva could not have been more smug and non-grateful about the situation. As some talking head on TV said, he looked like the Governor announcing a stay of execution for a prisoner on death row. I think in this case, the person that needs to be fired is Alleva. Since that is not happening, the consolation is knowing that he now too is a Bieber awardee.

Next week – Plans are up in the air as to whether we will attend the PAC 12 Championship next Saturday or sit in Buffalo Wild Wings and watch all the day’s action.


Posted by Dan From the Tailgate at 9:42 PM No comments: Links to this post