This week's recap is a slide show from America's Game. Turn up the volume and go to full screen.

Posted by Dan From the Tailgate at 6:02 PM No comments: Links to this post

Week 14 - When Champions are Crowned (sort of)

After being contacted by the University of Tennessee to become their next head football coach, with much consideration I have opted to pass on the offer and continue as your dutiful blogger. We took the weekend off from attending live games to focus our full attention on all the conference championship matches on TV. Of course we tailgated, it just happened to be in the cozy confines of my family room. Friends contributed a 13 lb. smoked brisket, pigs in a blanket, chicken wings, mac n cheese, homemade guac and chips, fine wine, fireball and cold beer.

Around the country -  By now, we all know who is in the playoffs, nonetheless here are your conference championship results:


The college football playoff has Clemson #1 playing Alabama #4 in the Sugar Bowl and Oklahoma # 2 versus #3 UGA in the Rose Bowl. The winners will play in Atlanta on 1/8/18. Here is a link to all the Bowl games:
http://www.fbschedules.com/ncaa/college-football-bowl-schedule.php 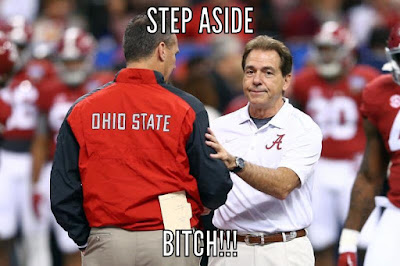 Frostburg State’s Cinderella run came to an end against mighty Mount Union in the Elite 8 for DIII. Good things in store for the Bobcats next year.

Bieber – This will be a rare award as it is not granted to a human for the first time in years. For those that watched the Big Ten Championship game you experienced a very unique 10 minute delay. The interruption was caused after Wisconsin scored a goal line touchdown run and in the process the turf in Lucas Oil Field tore away from the ground on one of its seams. Carl from Caddyshack was called on to come and repair the seam for the players’ safety. The poor guy worked feverishly as 80,000 sets of eyes live and millions more on TV were squarely on him. You could see the sweat on his brow and his heart rate accelerate as his hands worked magic for many minutes. Finally, another assistant greens keeper came out with a rake to help get the job done. Not sure what the hell he did other than provide moral support. After 10 minutes, the repair job was satisfactory and Carl left the field to rousing applause. Great job Carl. However, a very Bieberesque performance by the turf in this high profile game by getting all tore up on national TV.

Net week – We will be heading back to Philly for the Army Navy game to meet up with many old friends and family members. The next write up will be after Christmas for a mid-bowl season report. We will be attending the Foster Farm Bowl in Santa Clara and the Rose Bowl in Pasadena.

Posted by Dan From the Tailgate at 6:32 AM No comments: Links to this post