Here we go Tailgaters, week zero is behind us and the five days of Christmas are upon us starting Thursday! We had a little dry run with a backyard tailgate on Saturday watching the 3 televised D1 games. We qued some protein on the grill, imbibed some frosties and played my new tailgate game, QB 54. The real show begins for me in West Lafayette, IN on Thursday night, as the Purdue Boilermakers host the Northwestern Wildcats. I will be joined by my Labor Day cohort Jim “Tubby’ Devine, who roamed the halls of Frostburg State with me several decades back. Normal tradition is a triple header weekend over Labor Day, but I must cut and run and tend to family festivities back on the homestead. As I mentioned in the preseason primer, I am taking a step back from my 18-22 game seasons in order to watch #3 do her Pom thing under the Friday night lights at Monte Vista High School in Danville, CA. She has no clue that after I wave to her when I sit in the stands, that I am pretty much dialed into the game. It will be a more modest 12-15 game schedule when all is said and done.
I am often asked, what do I do in the off season to keep my fires burning? I have many hobbies to keep me occupied but this year my starvation from lack of football arrived early. Therefore, I purchased a subscription to ESPN + so I could watch all the Canadian Football League games. I have become a Saskatchewan Rough Rider fan and am awaiting my official T shirt. I also binge watched all 3 seasons of Last Chance U on Netflix. The series chronicles two different Jucos where talented kids end up after departing D1 schools or perhaps they did not have the grades coming out of high school. The language is salty, but the entertainment level is high. Lastly, I also binge watched QB One which follows three top rated high school QBs during the 2016 season. One of those is Jake Fromm of Georgia. I can do this because I spend a lot of time on airplanes and in hotel rooms traveling for work. It is not as much fun as watching Shameless with Mrs. Tailgate on the home front, but it will suffice.
I have also kept busy with Tailgate Connect spending my evenings being interviewed on podcasts, radio shows, magazines, blogs, etc. The business is primed to have a great season with over 40 schools represented with amazing authentic home team tailgates. Please spread the word to your friends and tell them to use your name when they sign up for their tailgates and we will pay you a commission of $10 per head. Like any new business, word of mouth and personal referrals are the strongest forms of endorsement.
Off Season Bieber -  No Contest – The Ohio State University -  with co protagonists Zach Smith, Gene Smith and of course the Urban legend himself, Mr. Turn a blind eye, Coach Meyer. The intrigue, the violence, the lying and cover up would make this a great soap opera if not for the fact that an innocent woman was repeatedly battered by a coach suffering from roid rage or male shrinkage. The 3 game punishment is an absolute joke for a man that used to cover up for the likes of Aaron Hernandez at Florida. Look where that discipline got him. I am not a fan of Ohio State per se, but I do love their tradition and passion for the game and their team. They are better than that and this will hurt them in the long run. 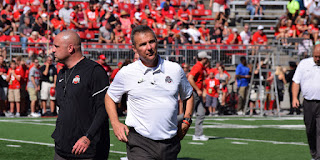 Happy Tailgating!
Posted by Dan From the Tailgate at 6:33 PM No comments: Links to this post