Season In The Rearview Mirror

By all accounts this was a memorable season on and off the field for the DFT Brigade. We had the privilege of watching a young man named Tyler Kent inspire a nation with his courageous fight against cancer which he ultimately succumbed to. We witnessed Dabo Swinney pull a Saban and replace his accomplished starting QB with a freshman named Sunshine that would lead them to another great campaign. The Stache blossomed out in the Palouse under Mike Leach resulting in ESPN Gameday finally gracing the campus in Pullman. Urban was reprimanded in Columbus and feigned health and family issues to once again retire from coaching. The crazy upset of Old Dominion over VA Tech, the fall of the Men of Troy and the rise of the Irish, and the resurgence of Texas were all indelible marks on the season.  We had hurricanes responsible for game cancellations and postponements. The battle between Tua and Kyler for the Heisman and in the playoff game was epic. UCF’s 25 game winning streak finally ended in the Bowl season. The return of the Prodigal Son to the plains of Lincoln, Nebraska provided hope for the Big Red faithful. The Floss replaced The Whip and the Nae Nae as the celebration dance of choice. The fans screamed for a legitimate 8 team playoff system that continues to fall on deaf ears, and lastly, Bama v Clemson IV would end the season once again.

As for DFT, I attended 14 games including the National Championship of which 6 were new cathedrals. Additionally, I was able to attend 7 high school games of the beloved Monte Vista Mustangs.  The epic weekends this year were Penn State with the Dons of Danville and friends, Mississippi State with my high school gang, Bedlam in Norman and Texas with the Snowflakes. Many other great games including  Army versus Navy, Colorado State at Florida and Northwestern at Purdue. We also launched Tailgate Connect and had moderate success for our inaugural year. I became a regular guest on the Sooner Fan Football Podcast every Wednesday night and made many new friends as a result.

Bowl Season for DFT consisted of the Redbox Bowl and the Natty both at Levi Stadium in Santa Clara, CA. Michigan State and Oregon squared off in the former in a 7-6 snoozer won by the Ducks. The Men of Laurelglen received free tickets courtesy of a Veterans group. We did a Bloody Mary and burrito breakfast tailgate as kickoff was noon local time. The new Shot Ski was christened at a tailgate for the first time.


The Natty as mentioned was another matchup between Clemson and Bama. We took in the championship festivities in San Jose on Saturday at the convention center and CFP Hotel HQ. I even shook Maria Taylor’s hand (College Gameday personality). My good friend Danny L scored 2 free lower bowl tix on the 15 yard line for me and the Don of Bettencourt Ranch, Chris “The Finger” Desimone. The Tailgate was hosted by Bama fans extraordinaire the Windsheimer and Jeffrey clans. Cold beer, dogs and a charcuterie of protein and cheeses were served. The entrance into Levi stadium was smooth and concession stands were not outrageously long to grab some essential brewskis.


As the entire nation witnessed, the game was a jaw dropping shocker. Clemson jumped out to an early lead on a pick six of All World QB Tua Tagovailoa. Bama responded with two touchdowns and Clemson scored on a bomb to win the first set 14-13. The Crimson Tide opened the second quarter with a field goal to take their only lead of the game at 16-13. And then the Tiger spigots were turned on full blast as Clemson would score 28 unanswered points behind a QB nicknamed Sunshine and a defense as impenetrable as the Death Star. Final score Clemson 44, Alabama 16. Clemson is now 2-1 v Bama in the Championship Game and 2-2 in the CFP overall. Congrats to Coach Dabo Swinney for running a model program and beating one of the best teams Alabama has assembled.
Bowl Season Bieber – The last Bieber of the year goes to the organizers of the Serv Pro First Responder Bowl along with ESPN for cancelling their named game in the historic Cotton Bowl. The game commenced on 12/26 under threatening skies as Boston College jumped out to a 7-0 lead over the Boise State Broncos. A big storm was moving in and lightning struck within a 10 mile radius. As is protocol, the teams were sent to their locker rooms to wait out the lightning. After 90 minutes it was determined the lightning was still a threat. So, the MENSA Elders in charge decided to just outright cancel the game. No effort to reschedule the next day in the unused Cotton Bowl for a day calling for sunny skies. Or what about calling Jerry Jones up to borrow his facility? Boosters, families, friends, bands, cheerleaders all traveled on Christmas Day or earlier to get there.  I for one would be a vocal activist marching on SERV Pro and ESPN HQs if I was one of them that had attended. There was no explanation of efforts taken to somehow continue the game leaving us all inexplicably hanging. For this uber egregious act, you two organizations win the final Beebs of the year.

Ginger – The Ginger Badass award goes to my friend Denny Warner who passed from this earth in December. Denny is the Father in Law to two of my close college buddies. Denny was someone who would go to all of his grandkid's sporting events no matter when or where. I reconnected with Denny 5 years ago when we rented a cabin to watch his grandson play football at Hampden Sydney College in Virginia. He was larger than life and was someone that could and did make friends with anyone. He would always send me complimentary emails about my blog and circulated it amongst his friends. I had several visits with him over the last few years where we discussed football, faith, family and solved world hunger. He never let age get in the way of having a great time and set the bar high as someone I looked up to. The first time I met him 35 years ago at his daughter’s wedding we were convinced he looked like the bad guy Victor Matlin from Beverly Hills Cop. Me and my college roommate chased him around the after party calling him Victor only to be swatted away with a smile. Well old buddy, you will be missed and we will all raise a Schaeffer for you when we think of you. You were simply a badass in all the right ways in life.


Next Year - The plans are laid for the Dons of Danville to have an epic weekend in NOLA and Baton Rouge for the Florida at LSU game. We are up to 20 people at last count.  The Seneca Valley High School gang will be descending on the Big House whilst staying in a little house for Notre Dame weekend in Ann Arbor. The Labor Day Blitzkrieg will consist of games at Bowling Green, Cincinnati, Kentucky and Louisville. Oklahoma travels to UCLA in September and we will be hosting an epic tailgate with our Okie friends and family at the Rose Bowl. There will be others, but these are the ones carved in stone for now. And so now, I enter the “Transfer Portal” of the off season abyss. Be back in August! 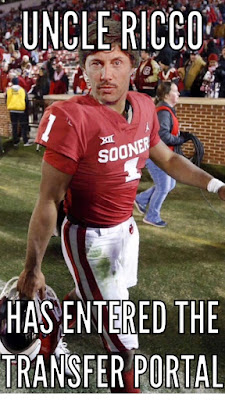 Happy Tailgating and a safe off season!


Posted by Dan From the Tailgate at 6:10 PM No comments: Links to this post