My much-anticipated weekend on the couch turned out be just what the doctor ordered. First up however was Friday Night Lights as the Monte Vista Mustangs traveled to Oakland to play Bishop O’Dowd. Pre game festivities took place at the legendary Ricky’s sports bar as I was the lone Pom Dad representative in a den of Football Dads. As one of the guy’s stated so profoundly “Dan is a Football Dad trapped in a Pom Dad’s body”. The local CBS affiliate came in and interviewed us on our thoughts about Antonio Brown. Apparently, I was too damn handsome as they cut my interview out. 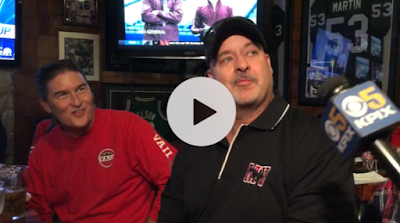 O’Dowd was coached by former NFL players Napoleon Kauffman and “Touchdown” Tommy Vardell. Monte Vista dominated the game and won 27-3. Upon returning home, I poured a nice glass of red to watch a recorded game of Boise State on the blue, in a stadium black out while they beat Airforce dressed in gray.


Up and at it early Saturday for ESPN Gameday. Three great feature stories, one on Wisconsin All American running back Jonathan Taylor, one on UGA QB Jake Fromm and the last on Arkansas State coach Blake Anderson who just lost his wife to cancer. The latter brought a tear to my eye. Damn that Tom Rinaldi!  One of the most anticipated matchups of the week turned into a contest of the strong versus the weak as Wisconsin absolutely thrashed Michigan. They were drinking old fashions and eating cheese curds in Madison Saturday night. Are Harbooger’s days numbered at Michigan? I cooked up a mess of Brian Donnelly’s “Famous Old Bay Wings” and slid into the afternoon games in between grazing, napping and grabbing an occasional adult beverage. Texas A&M v Auburn was a snoozer with Auburn dominating in College Station and winning by 8, but it was not that close. Pitt upset the 2017 National Champions (Just ask them.) UCF in a thriller at Heinz field. In the battle for the Iron Skillet, SMU bested TCU to improve to 4-0 on the season.


The fun really began with the third set of games as I switched from lagers to dark red vino. Both pared well with the wings. Mrs. Tailgate’s Cowpokes gave the Horns all they could handle in Austin but came up six shy of a tie. The game of the week did not disappoint as the Notre Dame fighting Irish traveled to Athens, GA to play between the hedges in Sanford stadium. The first half was as physical of a game as we have seen all year with ND doing a great job in bottling up the high-powered Dawg offense. The second half saw the UGA size and strength start to wear down the Irish on both sides of the trenches. Down 6, ND had the ball and a chance to engineer a game winning drive but it was not to be. Final score UGA 23-17. In a nod to my annoying neighbor John the UCLA Bruin fan, the most exciting game of the day perhaps took place in the Palouse. Wazzu was up by a comfortable margin of 32 in the third quarter. “Not so fast my friend”, as UCLA pulled out one of the most unimaginable comebacks and ended up notching their first win of the season by a final tally of 67-63. Combined yardage for both teams was about a mile with Washington State QB Anthony Gordon throwing for a school record of nine touchdowns.  A shout out to San Jose State for traveling to Fayetteville, AR and beating a SEC West team. I guess Arky can at least now go chant SEC for the rest of their conference as this was as bad of a loss as Tennessee’s loss to Georgia State earlier this season.

Bieber - The Cal Bears traveled to Oxford, MS to take on the Ole Miss Rebels on Saturday. The Bears were up by eight with fifteen seconds remaining with Ole Miss driving. Ole Miss caught what appeared to be a touchdown only to have the refs mark the ball just short of the goal line with the clock ticking toward zero. Ole Miss barely got the snap off in a futile attempt to run the ball in only to be denied and awarding Cal the victory. The pass should have absolutely been reviewed and the clock stopped on the previous play. Whether or not the Ole Miss receiver was in is not the bigger issue here. A play of that magnitude at that time being that close should have been reviewed. Of course, our culprits were the PAC 12 refs homering the call in an away venue. Just last week they blew a potential game altering call when Arizona State upended Michigan State in East Lansing. Thirteen years ago, Oklahoma traveled to Eugene, Oregon where multiple incorrect calls were made in the waning minutes ultimately handing Oregon an unearned win. Those refs were suspended for only one game. The PAC 12 body count they are racking up is giving the Clintons a run for their money. Better not say anything bad about them or you may be next. For this pattern of inaccurate calls that potentially alter a game’s outcome, the entire PAC 12 refereeing crew is awarded this week’s Bieber honors.

Ginger (Badass) – Last Saturday in Ames, Iowa, 24-year-old fan Carson King held up a sign on ESPN College Gameday with his Venmo handle stating his Busch Light supply needed replenishing. He ended up getting $35K sent to him that day in which he promptly donated to the children’s’ hospital adjacent to Iowa’s Kinnick stadium where the now famous, in-game wave takes place from the fans to children. The amount as of Saturday morning had swelled to over $245K and will be matched by Venmo and Busch raising the total to $735K. How amazing and selfless is that act given that he could have just kept the money and done something for himself. In fact, Busch went one step further and is giving him a year’s supply of the beer with his likeness printed onto the can. Your last name is King and you did a truly Kingly act of kindness and a badass one at that. Congratulations Carson King on being this week’s Ginger awardee!


Next Week - A tri-level trifecta will be pulled off for the first time that I can remember. Friday night high school game with Mrs. Tailgate, jump on plane Saturday and hit the Utah State game with “Don” Iorio, followed by another flight to Denver for the Broncos game on Sunday with former neighbor Craig.

Posted by Dan From the Tailgate at 8:50 PM