I'm on a mission from God!


I bounced into East Hartford for the UConn Huskies home opener versus the Wildcats from Villanova on Thursday night. With no Tailgate let alone no wingman to lean on, I had decided I would traverse the tailgate area in search of sympathetic souls to take me in. It so happens the couple that parked next to me Brigid and Rich took pity on me and invited me to join them. They are loyal UConn fans and overall huge college football fans. Now they are members of the DFT Nation. Rentschler Field (an actual old airfield), is about 20 miles from the UConn campus, so it was hard to get a complete flavor for this matchup. However, the Tailgate scene was ample as blue tents were erected throughout the surrounding parking lots and fields. As a pre-game treat we saw a two jet flyover and a bald Eagle circle the stadium and land on the field.  The stadium was at about 60% capacity as UConn faced off against FCS power Villanova. Although the size difference was evident, the Cats gave the Dogs all they could handle. UConn from the AAC escaped with a hard earned 20 -15 victory.

Awesome flyover at UConn
Friday AM had me jetting from Boston to Midway then down to Champagne to meet up with college buddy Tubby Devine for the Illinois – Kent State game. Pre-game activities consisted of sampling the offerings at the famous Kam’s and Joe’s in town. I also was donning the jersey of Mark Tagart, a standout linebacker and terror off the field for the Illini in the 80s and a friend of the Tailgate. Bets were placed that I would end up in Joliet State Penn under a case of mistaken identity. Upon arriving at the stadium we were briskly whisked into the adjacent practice facility by FEMA impersonators to keep us out of the pending thunder and lightning storm. We don’t obey “Authorities” well so we broke out of the refugee center and made our way into the stadium only to be quarantined again by the yellow vest brigade. After a two and a half hour lightning delay the game was postponed. So we departed to drown our disappointment. This game will not count on my list of games attended, it will have an asterisk next to it like Barry Bonds’s Home run record. I believe this is the first time this has happened to me or so I am told.

Lou Christie wrote this song with the Illini game in mind


The 2015 Nerd Bowl: At zero dark thirty I awoke on Saturday morning in Champagne and said out loud “It’s 106 miles to Chicago, we got a full tank of gas, half a pack of cigarettes, it's dark... and we're wearing sunglasses. Hit it!” I was on a mission from God, So onward I went up I -57 to the Northwestern campus for the big matchup with Stanford. I met up with our hosts Craig and Suzanne Castelein and was soon joined by Mrs. Tailgate, #3, and the Panovich/O’Malley friend and family crew of forty. Kickoff was 11 AM Central so this meant we take the route of a manic breakfast tailgate pre game soiree.  Chez Craig whipped up some standout breakfast burritos on the gas griddle and paired them nicely with spicy Bloody Marys. An assortment of healthy and unhealthy goodies accompanied the main course. I don’t think I have ever tailgated at a more scenic location, on a grassy knoll of Lake Michigan in the back of the beautiful Northwestern campus. 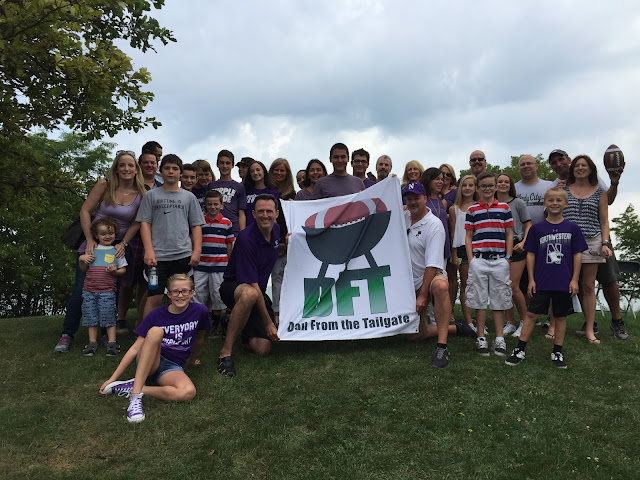 Originally named Dyche field until 17 years ago, Ryan Field is the home of the Northwestern Wildcats. The venerable structure saw its first action in 1926 and holds 47,000 + rear ends. Northwestern has long been the brainiac- school of the Big Ten conference and is better known for its academics than they are for their athletic prowess. The student section has been known to chant “That’s all right, that’s Okay, you’re gonna work for us one day!” as they are getting the snot beat out of them by a Big Ten powerhouse.  The Wildcats have been playing organized tackle football since 1882 and have several NFL perennial stars such as Otto Graham and Big Chris Hinton. In our party was former Wildcat O lineman Mihailo Panovich. He said when his Dad came to one of his games, the referee called an untimely infraction on Big #69. The fans in front of Mihailo’s dad were screaming “who was that idiot?” The Senior Panovich not being a connoisseur of American Football, thinking this was a good thing, proclaimed proudly “That’s my boy out there!”  It was essentially a Rudy type moment.

Stanford came into the game ranked #21 in the nation and was favored by 10.5 points. Stanford was also thought to have one of the better Defenses coming into the season. However, on this beautiful late summer Saturday on the shores of Lake Michigan it was to be Northwestern’ s day. The purple Cats clawed the living bark out of the Stanford Tree and outplayed them in every aspect of the game. Led by freshman QB Clayton Thorson, the Cats mounted three drives that resulted in 16 points. The Stanford receivers forgot what their scholarships were about and dropped numerous passes throughout the day. Stanford QB Kevin Hogan could be heard yelling after each drop “You’re killing me Smalls!” The NW Defense anchored by All Everything LB Anthony Walker was by far the more physical of the two groups all afternoon. Final score Northwestern 16 – Stanford 3. Keep an eye on Walker as I see NFL stardom in his future if he takes his meds and stays out of Coach Fitz’s doghouse.

Back to the tailgate lot for a post-game celebration with brats, dogs, chicken and plenty of liquid refreshments to ensure we would not be dehydrated. In fact our merriment carried on into Sunday for some of us. Overall it was an outstanding experience with phenomenal food, atmosphere and friends.

Around the Country:
It so happened that our hotel in downtown Chicago was housing hundreds of burnt orange clad Longhorn fans who were in town for the Notre Dame game. On Friday night, I am told they were seen everywhere bearing their colors and sporting that oversized Texas confidence. By Sunday you could not find a smidgeon of that awful color anywhere as the Fighting Irish served up a Texas Smoke out of their own by branding the Longhorns with a 38-3 beating. The SEC West withstood several strong tests with Bama, A&M and Auburn securing legitimate non- conference wins. The PAC 12 experienced a bi-polar first week with eight non-conference wins and four bad non conferences losses. Although Colorado has a legitimate claim that they were robbed Hawaiian style in Honolulu by the Zebras. Allegedly Five O is on the case now assisted by Magnum PI. In the game of the week, BYU behind backup QB Tanner Mangum won on a fifty yard “Hail Joseph Smith Pass” against the Blackshirts of Nebraska on the game’s last play. Chris Petersen is probably having second thoughts now about having left Boise State. Upon his return as the head man for Washington to the Blue, he not only suffered a 16-13 loss but it was at the hands of his former protégé Coach Brian Harsin. In the game that was postponed Friday and played Saturday the Fighting Illini scalped the Golden Flashes 49-3. In all, there were four FCS wins over FBS teams this weekend continuing the tradition made famous by the Appalachian State win over Michigan eight years ago. 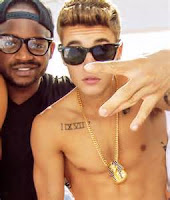 Bieber Award – several good choices again including the refs of the Hawaii/Colorado game and the Kansas State Jayhawk band for their pornographic performance, but this week’s honors go to the meth heads of Gainesville, FL. While the University of Florida was inflicting pain on the field to an outmanned New Mexico State team, the NMSU team bus was being robbed of all its valuables. That’s like robbing a house on the day of a loved one’s funeral. This was a classless act and the perpetrators will be tried and shot once they have been apprehended. In an unrelated matter a group of Alligators were seen making off into the swamp with high end electronics, playbooks and gym bags.

Next week The Tailgate will make its pilgrimage to promontory point for a double header weekend. I will be joined by Tailgate Brian for the Holy War when Utah hosts Utah State Friday night, and the Boise State Broncos at BYU on Saturday night. I hear these two are crazy party schools. The BYU game will be a white out. Look for me I will be wearing black.

Posted by Dan From the Tailgate at 8:35 PM